Liverpool Hunt Sabs have been very busy over the past few months continuing to be active on the ground in the Cheshire Cull Zone.

We’ve found badger setts blocked and interfered with throughout the post cull period and despite the best efforts of the cull operators to kill the Cheshire badgers during the cull we have found the overwhelming majority of our targeted setts to be very active. Information collated by our frequent field checks & widespread use of covert trail cameras have shown numerous badger cubs have been sighted, as well as plenty of fresh latrines & recent excavations recorded and already signs of perturbation and relocation of badgers from previously targeted setts to new sett locations.

Our most recent video from our trail cameras: Badger Cub Scratching.

You can keep up-to-date with all our going on’s in the Cheshire cull zone over on our facebook page: https://www.facebook.com/LiverpoolHuntSabs/

Your donations save lives! Help keep us out in the Cull Zone: ko-fi.com/liverpoolhuntsabs

Adam and his fiancé live next door to the Orchards Farm.

Adam has been spotted driving around the cull zone late at night trying to harass and intimidate anti cull activists. On at least two occasions he threw fireworks out of his vehicle at sabs and wounded badger patrols. If you see his vehicle out and about please report it to police as he’s likely to have explosives in his car.

Joined some of our northern comrades yesterday and paid a visit to the Holcombe harriers. We found them at the Robin Hood pub in Tottington.

Sabs stuck with the hunt most of the day. The hounds managed to put up a few hares during the day but Sabs were on hand to ensure they all made a clean getaway.

We lost them towards the end of the day due to being blocked in by hunt supporters and one attempting to try and put down our tyres but Sabs spotted him and made sure no damage was done to our van.

Shortly after the huntsman decided to call it day and we left once the hound where put away.

Want to help us stay out in the field? You can donate to us via our Paypal: https://www.paypal.me/liverpoolhuntsabs

Sabbing can be dangerous with many of us experiencing violence and aggressive behaviour from huntsmen and hunt supporters. We are looking to raise funds in order to buy a new small body camera which will enable us to film the hunts discretely and ensure we capture vital evidence which may lead to a prosecution.  A body camera will also help us to document any illegal hunting, giving us concrete evidence and ensuring a conviction.

Here is the link to our fundraiser: https://gogetfunding.com/body-camera-for-liverpool-hunt-sabs/

Any donation, no matter how small will help us massively and will be greatly appreciated.

We are very happy to announce that we now have a dedicated merchandise website. Currently we only have our new T-shirts in store but soon stickers, badges, postcards and more will be available to buy. All money raised through sales will help keep us in the fields and out protecting our wildlife.

You can head to our site and check out the merch available here: liverpoolsabs.bigcartel.com

Hunt on the land of Sir Reginald Sheffield(David Cameron’s Father in law). Despite the police on the day not willing to take any action we reported it to North Yorkshire police and a wildlife officer was assigned to the case.

We had video evidence of the huntsman encouraging hounds through the woodland and the aftermath of the kill, which showed the whipper-in and hounds running away from the lifeless fox. We managed to recover the body of the fox and it was taken by North Yorkshire Police so an autopsy could be performed.

After finally being able to speak to someone within North Yorkshire Police we received this response today “The case was fully reviewed by RSPCA and a case progression manager from North Yorkshire Police and a decision was made that we had insufficient evidence to pursue a prosecution under the Hunting Act 2004. During the investigation a number of issues were identified as not ‘best practice’ therefore we held a meeting with the master of the hunt to discuss these issues with him.

So despite all the evidence and also video footage of the hunt chasing numerous deer throughout the day the hunts only punishment was a meeting with the police regarding their behaviour.

Having not been given any more information we have decided to put in a Freedom of Information request regarding the outcome of the autopsy of the fox and also for the disclosure of what was said in this meeting between the police and the hunt master. We will update everyone once we receive a response.

Hunt saboteurs witnessed a fox being killed by the York & Ainsty South Hunt on the 21st Feb 2015. 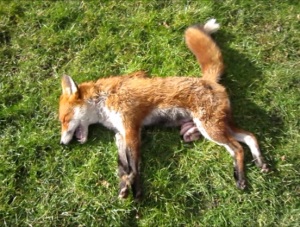 The hunt had met at Sutton Park, North Yorkshire which is owned by Sir Reginald Sheffield the PM’s father in law. Hunt Saboteurs from Liverpool, Sheffield, West Yorkshire and various Scottish groups had attended the hunt and a saboteur from Liverpool witnessed the fox being killed by the hounds.

The hunt saboteur had seen the fox bolt from the woods and tried his best to stop the hounds from chasing it. Once he exited the woodland he witnessed a whipper-in dismounting her horse and trying to take the fox’s body away. The whipper-in then noticed the saboteur and quickly left the scene.

The York & Ainsty South hunt have claimed that they were legally trail hunting and that “It’s not unusual for hunt saboteurs to make up such stories.”

The hunt saboteurs have footage of the days events which has all provided to police as evidence. The body of the fox was also handed to police who will carry out a post mortem on the body to determine how the fox died.

A full interview with the saboteur who witnessed the killing of the fox can be viewed here: http://www.dailymail.co.uk/news/article-2973927/Police-probe-slaughter-fox-hunt-hosted-PM-s-father-law-picture-dead-animal-posted-online.html

Full report of the day in question can be viewed on Liverpool Hunt Sabs Facebook page: https://www.facebook.com/liverpool.huntsabs/posts/875470805827844